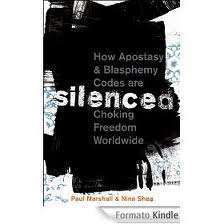 (By Robert R. Reilly; thecatholicthing.org) Whenever Benedict XVI speaks on the subject of dialogue with Islam or directly addresses Muslims, he invariably emphasizes the acknowledgment of freedom of conscience and religion as the prerequisite for dialogue, not as an outcome from it. The new book, Silenced: How Apostasy and Blasphemy Codes Are Choking Freedom Worldwide, by Paul Marshall and Nina Shea, shows in dramatic detail how very far many Muslim-majority countries are from meeting this prerequisite.

Silenced is an indispensable book and an invaluable reference for anyone interested in sustaining freedoms of conscience, speech, and religion. It is as thorough as it is devastating in its survey of Muslim-majority countries and their strictures on these freedoms, and on the influence that these very same countries are attempting to exercise, with some success, on the West’s discussion of Islam.

If you want to understand the significance of the manufactured incitement against an otherwise insignificant fourteen-minute movie trailer, “The Innocence of Muslims,” you will need the perspective that Marshall and Shea provide. This recent episode is simply one of many that have been used in a broad campaign to “silence” the West. The book lays out the details of many preceding incidents that are part of this pattern, and that have been used with varying degrees of success.

Silenced does not analyze the roots of Muslim intolerance, which are ultimately to be found in Islam’s profound denigration of reason, but to examine its effects on the world today. Marshall and Shea give detailed descriptions of how the main Muslim countries treat or restrict the freedoms mentioned above.

It is a variegated picture: Saudi Arabia, for example, is far away from Indonesia, not only in geographic but in cultural terms.  The authors are careful not to homogenize the Muslim world and labor to be specific in their treatments of each country and of the variety that exists within Islam itself.

Therefore, the book is not polemical; it is descriptive and analytical. What makes it so compelling are the many biographical stories of individuals, both Muslim and non-Muslim, who have fallen victim to the apostasy and blasphemy laws in these countries. Some of these are well known; many are not. They are mostly harrowing.

The stories include, of course, many Christians, but also groups like the Ahmadis in Pakistan and the Baha’is in Iran. Almost everywhere, converts from Islam to Christianity or to any other religion are severely penalized, if not formally by the governments under which they live, then by the general Muslim culture, sometimes to the point of vigilante murder.

After detailing the repression, Marshall and Shea describe at length the attempts to legitimize it – and, in fact, to export it – through the United Nations and other international fora, most especially the Organization of Islamic Cooperation (OIC). These efforts have encouraged Muslims and their sympathizers living in Western countries to go after those in the press, clergy, or political life whom they consider Islamophobic – i.e., to have spoken ill of Islam or Mohammed.

While convictions in the ensuing legal proceedings are few, the process itself, as described by one Canadian victim of it, is the punishment – the defense can be very costly and injurious to one’s reputation. Along with legal prosecutions, there is the disturbing matter of vigilante violence, as murderously practiced against the translators of Salman Rushdie’s book and against Theo van Gogh in the Netherlands, which has exercised a substantial chilling effect on publishers, performers, and writers alike in the form of self-censorship.

There is another aspect of the issue that Marshall and Shea emphasize to good effect. American-Turkish Muslim Zeyno Baran comments, “By tolerating intolerance, many in the West make it harder for moderate and reformist Muslims to succeed.” By bending over backward to accommodate the sensitivities of certain Muslims in terms of what can and cannot be said regarding Islam, Western governments may be inhibiting the very thing the Muslim world needs most – reform.

A few of the most powerful sentences in the book are provided by the late Nasr Hamid Abu-Zayd, an Egyptian professor of Arabic studies:

charges of apostasy and blasphemy are key weapons in the fundamentalists’ arsenal, strategically employed to prevent reform of Muslim societies and instead confine the world’s Muslim population to a bleak, colorless prison of sociocultural and political conformity. . . . Such laws play directly into the hands of Islamic radicals who seek to unify and politicize Muslim societies not only against the West, but also against the very concept and principles of modern life, such as freedom, justice, human rights, and the dignity of man, which are themselves inseparable from the right to freedom of conscience and expression.

For his views, Abu-Zayd was declared an apostate and had to flee Egypt.

In other words, the last thing we should do is to conform ourselves to the demands of the Organization of Islamic Cooperation to extend, much less approve, the blasphemy laws imposed in its member countries. In the beautiful foreword to this book, written by the late Abdurrahman Wahid, the former president of Indonesia and spiritual guide to the largest Muslim organization in the world (Nahdlatul Ulama) advises, “Rather than legally stifle criticism and debate – which will only encourage Muslim fundamentalists in their efforts to impose a spiritually void, harsh, and monolithic understanding of Islam upon the world – Western authorities should instead firmly defend freedom of expression, not only in their own nations, but also globally, as enshrined in article 19 of the Universal Declaration of Human Rights.”

This noble book is the very defense that Wahid recommended.

© 2012 The Catholic Thing. All rights reserved.