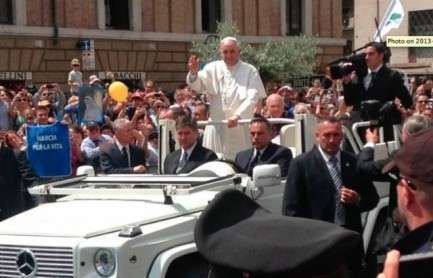 ROME, May 12, 2013 (LifeSiteNews.com) – Pope Francis surprised about 40,000 Italian and international participants in today’s Marcia per la Vita (March for Life) Internazionale in Rome this morning, when he left the Apostolic Palace to greet them personally from his popemobile in the street where they were lined up.

Monsignore Ignacio Barreiro, the head of the Rome office of Human Life International, told LifeSiteNews.com that for the pope to have effectively joined the March for Life was highly unusual.

Since his election, the pope has gained a reputation for making spontaneous gestures that have sometimes taxed his security staff, beginning with taking the bus back to his temporary residence with the other cardinals the night of his election, instead of the car reserved for the pope.

In this case, however, the Vatican appeared to have prepared the event ahead of time. Monsignore Barreiro noted they had prepared crowd control barriers to guide the popemobile out of St. Peter’s square and across the adjacent piazza and down the wide Via della Conciliazione that leads up the Basilica.

But if organizers knew about a planned appearance by the pope at the march, they made no mention of it before the event, leaving participants delighted by the unexpected arrival of the pontiff.

“The March for Life brought 40 thousand people to Rome today,” organizers announced after the event. “The Pope greeted the march at the Regina Coeli and then met the parade on the Popemobile in the Via Concilazione.”

In a shout-out to the marchers from his usual weekly Regina Coeli address, the pope briefly welcomed the crowd and endorsed a European-wide pro-life petition against embryo research.

The ‘One of Us’ campaign is seeking to gain 1 million signatures as part of a European Citizen Initiative. If organizers of the campaign achieve their goal the European Parliament is duty-bound to schedule a debate on the issue.

“I invite you to keep the attention of everyone on the important issue of respect for human life from the moment of conception,” the pope told the marchers.

He also invited all to attend the Vatican’s “Evangelium Vitae Day,” which he said would be “a special moment especially for those who care about the defense of the sanctity of human life,” to take place “in the context of the Year of Faith,” on 15 and 16 June.

March organisers were delighted with the greeting and with the extraordinary surge of numbers from last year’s march, which attracted 15,000 from around the country.

“The welcome of Pope Francis represents the highest recognition for the initiative and the confirmation of the sensitivity of the Pope to the non-negotiable principles, beginning with the right to life,” organisers said.

Mons. Barreiro also described the dramatic increase in numbers, from 1000 two years ago, to 15,000 last year, to about 40,000 today. This he put down to the hard work of the organisers in helping thousands come by bus from up and down the length of Italy, and to a “renewed awareness” among the public that Italy’s abortion law “must be abrogated.”

“The people are now really certain that we have to stake a stronger position than that which has been held in the past by some Italian pro-life groups.”

The pope is known for his strong defense of the right to life.

In 2005, as activists urged Argentina to legalize abortion, the future pontiff urged Catholics to defend the right to life even if they “deliver you to the courts” or “have you killed.”

At a Mass in Buenos Aires on Aug. 31st, 2005 in honor of St. Raymond Nonnatus (Raymond “the unborn”), who is revered as the holy protector of pregnant women, the then-Cardinal said that promoting life is “a road that is full of wolves.”

“Perhaps for that reason they might bring us to the courts. Perhaps, for that reason, for caring for life, they might kill us,” he said. “We should think about the Christian martyrs. They killed them for preaching this Gospel of life, this Gospel that Jesus brought. But Jesus gives us the strength.”