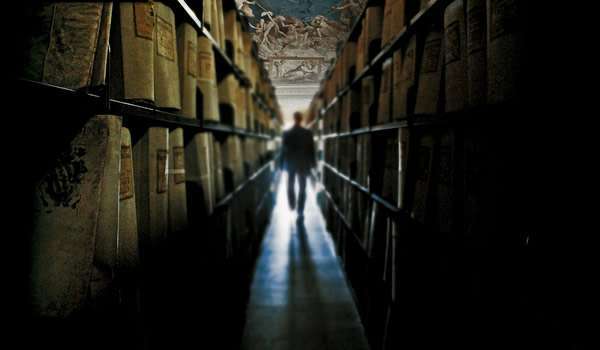 By George Weigel, nationalreview, Rome — The very name “Vatican Secret Archives” tends to trigger the Dan Brown reflex in minds given to conspiracy theories and black legends about the Catholic Church. In fact, there is nothing sinister about the title of this treasure trove of historical materials; “secret,” in this case, is Vaticanspeak for the private archives of the papacy, which were opened to qualified scholars in 1881 by Leo XIII, the founder of the modern papacy and a man unafraid of the truths that history could teach.

To mark the 400th anniversary of the founding of this remarkable institution, the Vatican and the City of Rome have assembled an extraordinary exhibit of materials from the Secret Archives, Lux in Arcana (“Light in Mysterious Places”), which can be enjoyed at the Capitoline Museum in the Piazza del Campidoglio until September 9, and sampled online at www.luxinarcana.org. If good fortune brings you to La Città before September 9, reserve at least three hours to savor an assemblage of primary historical materials of a magnitude never before exhibited in one place, and unlikely to be shown again in the foreseeable future.

Some of the documents — written on such various materials as parchment, vellum, paper, and birchbark (the medium for an 1887 letter from the Ojibwe Indians to the pope, “the Great Master of Prayer, he who acts in Jesus’s stead”) — bring to mind epic moments and historical turning points across ten centuries: the handwritten records of Galileo’s trial before the Inquisition; Pope Alexander VI’s bull Inter Cetera (which might be translated, “Among Other Things”), dividing the New World between Spain and Portugal; the 1530 petition from dozens of members of England’s House of Lords, asking Pope Clement VII to annul Henry VIII’s marriage to Catherine of Aragon so that the Tudor king might marry Anne Boleyn; Gregory XIII’s calendar of 1582 with the “missing ten days” in October, an excision that rectified the inaccuracies of the earlier Julian calendar; a letter from Mary Queen of Scots to Sixtus V just before her execution; Polish king John III Sobieski’s 1683 letter to Innocent XI, reporting his victory over the Turks at the Battle of Vienna; letters from Jefferson Davis and Abraham Lincoln to Pius IX during the U.S. Civil War.

Advertisement
More recent documents and artifacts recall the darkness of the mid-20th century: a report on the execution of Italian partisans and patriots by the German SS at the Ardeatine Caves outside Rome in 1944; a miniature Polish “Black Madonna” crafted from scraps at the Oberlangen concentration camp as a gift for Pius XII; a handwritten index of the hundreds of priests imprisoned at Dachau in what some historians refer to as “the world’s largest rectory”; and a heart-rending 1945 letter to Giovanni Battista Montini, later Pope Paul VI and then Vatican deputy secretary of state, from the papal representative in The Hague, forwarding a request for information on the fate of Edith and Rosa Stein from a brother-in-law in New York who had lost track of them three years earlier — just prior to their execution at Auschwitz (Edith Stein was canonized by John Paul II in 1998).

There is also one major surprise, to this visitor at least: a letter from Voltaire to Benedict XIV, written in 1745, in which the man remembered for the hypersecularist slogan Ecrasez l’infâme! (“Crush the infamous thing!” — namely, biblical religion), addressed the humanist pope as “the Father of the World,” and closed with “a kiss in all humility . . . of the most sacred feet.” Benedict XIV and Voltaire had their differences, but however much the latter may have been engaging in flattery tinged with irony in this letter, he seems to have recognized the intellectual and literary accomplishments of the former — a sentiment unlikely to be replicated by, say, Richard Dawkins in respect of Benedict XVI.

Then there are the documents of particular interest to Catholics and historians of Christian thought. One great historical might-have-been is embodied in the parchment manuscript of Laetentur coeli (“Let the heavens rejoice”), the 1439 papal bull announcing the end of the schism between Rome and Constantinople, the Christian West and the Christian East — a temporary repair of the breach that did not last, to the detriment of both parties. Leo X’s 1521 decree excommunicating Martin Luther provides one documentary bookend to the exhibit’s recollection of the subsequent fracture of western Christendom; the other is a 1524 letter from Erasmus to his friend Matteo Gilberti, bishop of Verona, in which the Dutchman urges moderation in Catholicism’s response to the challenge of the early Reformers, so that “to remedy one evil, another is not committed.” Then there is the 1542 bull convoking the Roman Church’s ultimate response to the Reformation, the Council of Trent, which, over 21 years, created the form of Catholicism that is now leaving the stage — to be succeeded by the Evangelical Catholicism whose birth was accelerated by Vatican II (whose bull of convocation by John XXIII is also in Lux in Arcana).