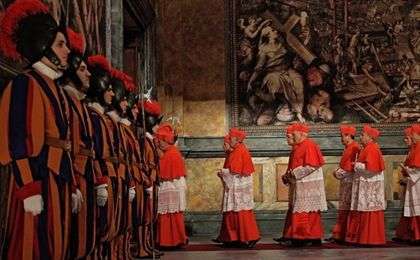 (By Rev. Marcel Guarnizo on Conciliovaticanosecondo.it) On Thursday the 21st of February Mr. Ignazio Ingrao, writing for Panorama magazine in Rome, wrote a piece, headlined “Il dossier segreto condizionera il conclave” (“The secret dossier will determine the conclave” [my translation]).

Ingrao’s story sparked news reports across the globe. These subsequent reports launched serious allegations against the Vatican and the Pope. Ingrao’s article was the basis for an explosive report by Mrs. Conchita De Gregorio, published in the Italian daily La Repubblica also on February 21. De Gregorio’s article, headlined “Sex and Careerism, the Blackmail in the Vatican, Behind the Resignation of Pope Benedict XVI” ([my translation]), would become the main source for dozens of major news stories around the world. There are reasons for the explosive response to the La Repubblica story: The claims in De Gregorio’s article vastly embellished the information the La Repubblica author had received from Mr. Ingrao. De Gregorio had based her article on Ingrao’s and then gone beyond, “to extremes”, as Mr. Ingrao later told me.

I have read both pieces and can report that this is true. Ingrao’s piece does not make many of the vital claims La Repubblica published under De Gregorio’s byline. However, La Repubblica’s version of the story soon became the basis for many other reports. The articles that would be derived from all La Repubblica  trended to the scandalous. The London Guardian linked the pope’s resignation to the discovery of a “… network of gay prelates…some of whom were being blackmailed by outsiders.”  Over at the Irish Times, a day later on February 22, Paddy Agnew reported that the Pope’s resignation “…was at least partly prompted by the “inappropriate influence” of various lobbies, including a gay lobby…”  So there you have it: A media firestorm: Prelates being blackmailed, money being stolen, swirl upon swirl of innuendo and rumors in Rome and around the world.

My simple objection is that none of this has been verified. Speculation is very different from facts. If I, as a professional journalist state that prelates are being blackmailed by a gay lobby, does this not presuppose that I know who and why, or at the very least, have sources who have substantiated these allegations before I rush them into print? As a responsible news reporter, am I not compelled to determine that there is some news and not just empty speculation? Am I not morally obliged to determine, when repeating the claims of another publication—such as La Repubblica—that the report it quotes exists, that someone has seen it, and that it says what in fact actual, reliable witnesses purport that it says?

With these questions about the journalists involved in the current swirl of news stories in mind, I decided to seek out Mr. Ignazio Ingrao, and seek to better understand what had taken place and what his intention was when writing the article. I was also hoping to clarify some of the questions raised by his report and the ones that followed it. The faithful and many other readers around the world, needed clarity on these issues, I believe. So I called Mr. Ingrao, and left a message asking if we could speak about the matter.

Mr. Ingrao kindly agreed to meet me at the Press Office of the Holy See February 25, and we walked over to a café to have a coffee and talk. Mr. Ingrao is young, soft-spoken, and seemingly a modest and humble personality.

I started by reiterating some things I already knew about the news stories, namely that they had all made statements about the contents of a recent Vatican dossier on the Vatileaks scandal, prepared for Pope Benedict by three cardinals. The cardinals  produced a single copy, and gave it to the pontiff, who apparently ordered it to be locked in a safe. I asked Mr. Ingrao if he had in fact seen the dossier, because it was clear that the impression that some had seen the dossier was being circulated in the media. He replied “ I have never seen the dossier.”

He explained what he was trying to do with his article: “… The key point was to try and understand how the commission of cardinals had used the information, their methodology… But I do not know the conclusions that they reached. Not even one copy of the verbal testimony was given to anyone. The commission kept all the information. Not even a sheet a paper about it (as a leak), exists to my knowledge.”

I then proceeded to try to clear up another ambiguity. “Have any of the cardinals in charge of the investigation, told you anything about the contents?” I asked. “Not a word”, he responded. “What I wrote did not come from them.”

Mr. Ingrao’s response was compatible with my own research into the matter. One of the cardinals physically recoiled at even the mention, of the dossier. He positively laughed that anyone in the press could even insinuate such a thing. And, clearly, he felt that even the question was an attack on the dignity of the commission he participated in.

I then asked Mr. Ingrao, “Has the dossier been leaked to anyone?  Did a leak make it possible for you and La Repubblica to write about it?” Mr. Ingrao answered plainly: “It is not true that the dossier has leaked.” He added that the impression that someone had the cardinals’ dossier or a report on its contents was the result of the fact that Panorama and La Repubblica  had both printed articles that referenced the dossier. They had produced these news pieces almost simultaneously. But their contents were different. Most simply assumed that the dossier had therefore been leaked. But the truth, Mr. Ingrao told me, is that Panorama had forwarded an advance copy of Ingrao’s article to La Repubblica and this had been the basis for what La Repubblica had published, albeit taking the innuendo to a higher level, as he described it. Mr. Ingrao repeated, that La Repubblica had taken his work “…in a direction I had never intended.”

A further vital question was lingering in my mind. Is there a powerful gay lobby that blackmailed the Pope or even high prelates, and that this undue pressure is what had caused the Pope to resign? Was it Mr. Ingrao’s view that the Pope was trying to protect the Church from further scandal and revelations being released and that to do so, he had opted for a resignation? His answer was to the point, “It cannot be said that a gay lobby forced the Pope to resign.” And that furthermore it “… is totally false that the Pope or the Holy See, has ever been blackmailed to force a resignation.”

Why then all this talk about the Pope resigning because of the now infamous dossier? “The dossier…” he repeated, “…cannot be said to have been the reason for the Pope’s resignation. The resignation was a decision that was maturing in the Pope’s mind. He resigned for a multiplicity of reasons.”

However, Mr. Ingrao said, he felt that the exaggerated and unsubstantiated reports may have been in part  “designed certainly to hurt the Pope…certainly to put the Holy See in a bad light.”

The Vatican described the allegations as , “… reports often not verified, and uncorroborated, or even false, which have caused great damage to persons and institutions.” (My translation).

Mr. Ingrao then explained that the objective of his Panorama article had been to highlight the investigation and the dossier it had produced. He felt that the fact that the Holy Father had requested it warranted a report, and that he was trying to shed light on the methodology the cardinals had used. He added that the cardinals’ dossier is a historical document, which is important now and will be important for the successor of Pope Benedict XVI. He said he thinks the Pope had exercised great courage in asking for the investigation and that now the next Pope would have very useful information to carry on with his ministry. He expressed that he had tried to act with utmost respect, as he felt that what he was writing was very important.

What a different story from the man who started an international firestorm, and a most needed testimony from the man who wrote the original source of all the scandalous, uncorroborated accusations being launched by the media at this time.

Is civility in this matter still a possibility? Is the international media capable of journalistic professionalism? Will those responsible for this firestorm of innuendo consider  retracting much of what has been said and act with the respect due to spiritual leader and head of state such as Benedict XVI. One can only hope.