In Cina chiese chiuse per Covid. Ma anche in Scozia…

Rome Celebrates Mother’s Day With Its 1st March for Life 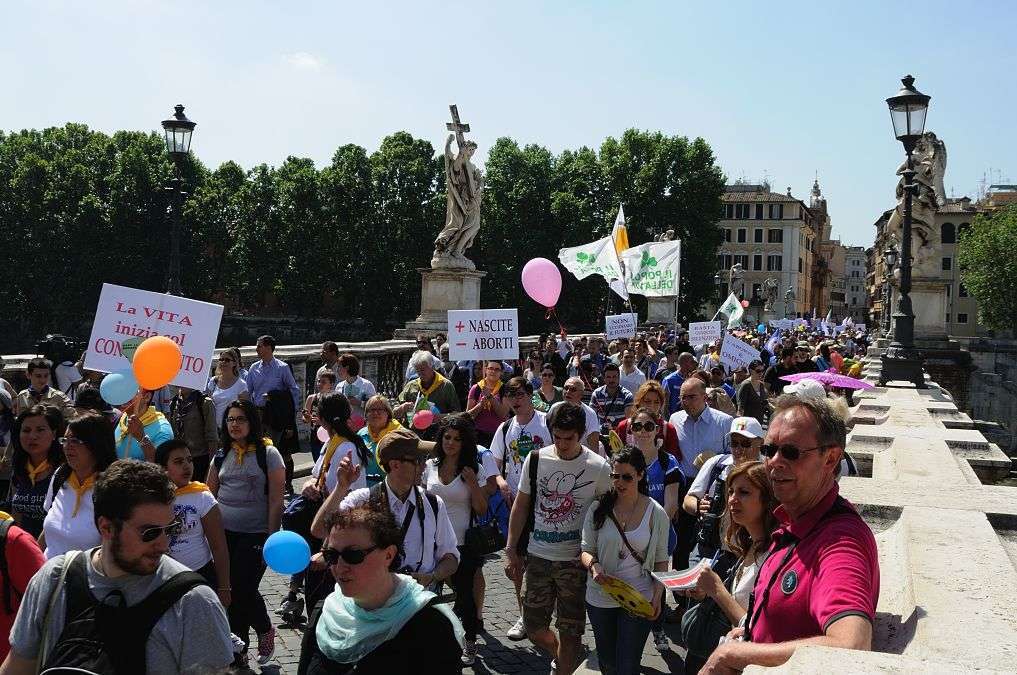 By Ann Schneible, ROME, MAY 14, 2012 (Zenit.org).- Nearly 7,000 people from around the world took to the streets of Rome on Sunday to peacefully march in protest against violations of the human right to life from birth until natural death.

The March for Life, the first to ever take place in Rome, began at the Colosseum at around 10 in the morning, passed through Piazza Venezia and Largo Argentina, then officially concluded at Castel Sant’Angelo. Most of the marchers continued on to St. Peter’s Square and into the basilica for Sunday Mass.

The primary objective of this March for Life in Rome was to make a stand to protect the dignity of human life in Italy, where abortion has been legal since 1978, and where the practice of euthanasia – as was witnessed in the case of young Eluana Englaro in 2009 – has begun. Even though this march was directed toward the Italian government, there was nonetheless a strong international presence, with many participants coming from other parts of Europe, Asia, Africa, and the United States.

The night before the March for Life, a vigil was held at the Basilica of Saint Mary Major with Eucharistic Adoration and Benediction, which was presided over by Cardinal Raymond Burke, Prefect for the Supreme Tribunal of the Apostolic Signatura.

“The whole force for the March for Life,” Cardinal Burke told ZENIT, “comes, obviously, from Christ and from His Real Presence with us in the Holy Eucharist. So tonight we wanted to be with His Presence, praying to Him that the March, first of all, be carried out, and that it also be efficacious for promoting renewed respect for human life.”

The cardinal went on to explain the importance of bringing about a global awareness of issues pertaining to life through the march. “Here in Rome you have had an international participation – here tonight from France, from Italy, South America – but certainly the awareness has to be spread more and more. And that’s why it’s important that in every nation there be the March for Life, that this is witnessed by people from other nations, and that they are inspired also to do the same.”

This March for Life, the first ever to take place in the Eternal City, was intentionally structured according to the March for Life in Washington, DC, which takes place every year near the anniversary of the US Supreme Court decision to legalize abortion.

Dominican Father Dominic Holtz, an American professor of philosophy at the Angelicum University in Rome, spoke with ZENIT about the significance of there being such a strong American presence at an international march. “I think Americans are much further developed in how to use the public sphere to speak about abortion,” he explained. “We’ve been at it longer, and I think we know the ways, the difficulties, and the need to have patience to act. I think we can contribute our enthusiasm, what we know.”

“I think it’s also important for us, in our case, to know that there are other people in the world – this isn’t just an American issue – and to hear and see this global support for life that we can experience here and be part of.”

One of the many religious communities participating in the March for Life was the Congregation of the Servants of the Lord and the Virgin of Matará. Sr. Maria Mater Compassionis, a native of Minnesota, and member of the Congregation, shared with ZENIT the importance of taking part in this march.

“It’s very appropriate that we’re here,” she said, “at the first national March for Life in Rome, because what place is more Catholic and what place should be more of a testimony to the dignity of human life? So to participate with both of our charisms, to bring the message of the Incarnation to the world and to be a testimony for life.”

“In all of our houses of formation,” she continued, “[and in] our apostolates throughout the world, we strive to live the fullness of the Catholic teaching by the grace of God. In every aspect of our apostolate – in catechism, in working with youth – we constantly bring the truth of the message of life because there’s so much deception and lies in the world – that it’s not really a baby, that it doesn’t really hurt women – but we know, of course, that’s not true, and that Christ is the Way the Truth and the Life, so we want to be here today to be a testimony to the fullness of the teaching of the truth and to be a testimony to life.”

The ethical problem of abortion.

Opposition to abortion and euthanasia stem not only from religious beliefs, but also from the serious ethical concerns regarding the impact of such practices on society. Representatives from Nigeria’s International Bio-research Institute (IBI) were also present at the March for life. Professor Edmund Agbo, who represents IBI, explained: “We know very well that the life of man has been threatened by the discoveries of man, of science, and of technology, and if something urgent is not done, it could be very bad for mankind. We are here to support this great initiative, this movement for life because the culture of death is prevailing in our contemporary society. Therefore, we have to do something to [confront] this culture of death and [restore] this culture of life so that man’s life – from conception to natural death – will be protected.”