Home › International News› The “confinement” of the Sanctuary of Fatima 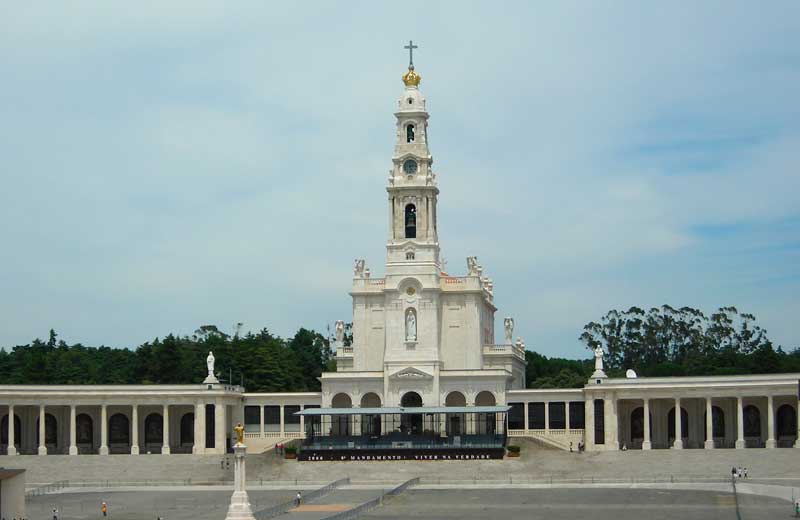 (Roberto de Mattei, Rorate Caeli – May 13, 2020) On the eve of the 103rd anniversary of the apparitions at Fatima, we learnt that the Portuguese National Republican Guard (PNRG) since May 9th has been conducting operation “Fatima at Home” with the aim of impeding pilgrims from entering the Marian Sanctuary on May 13th. The news was given by the Director of Operations, Vitor Rodrigues, who praised the ‘fantastic collaborative position’ of the members of the Catholic Church, which the PNRG had been working with ‘for many weeks’.* Following this operation of “confinement”, the Fatima Sanctuary was placed under surveillance by 3500 National Guard soldiers, with the duty of assuring that no member of the faithful might approach the place without reasonable justification.** And, for the authorities, prayer obviously doesn’t constitute a valid justification. Basically, all means of access to the Sanctuary have been cordoned off, but even other places of devotion as well, such as Aljustrel, the village where Lucia, Francesco and Jacinta were born, Valinhos, the apparition site of August, and even the Via Crucis.

It’s as if we are on the eve of the French Revolution again, when Jansenism, Gallicanism, the Enlightenment and enlightened Catholicism – different and varied forces, but united in their hate for the Church of Rome – linked together and multiplied their forces, under the shadow of the Masonic Lodges, to destroy definitively the religious and social order founded by Christianity.

The limitation on the Church’s activities in the sphere of conscience, was founded on the idea that only the State had authority over society. But expropriating the Church’s public role means condemning it to slow asphyxiation and subsequent death. In Portugal, the representative of the anti-Catholic policy was José de Carvalho and Melo, Marquis of Pombal, a prominent exponent of Freemasonry and Head of the government from 1750 to 1777, under the reign of Joseph I of Braganza. In the Austrian Empire a similar policy was applied, from 1765 to 1790,by Joseph II of Hapsburg-Lorena, and for this it was also called “Josephinism”. The sovereign appointed bishops and abbots, intervened in the lives of ordinary religious, and presented himself as a reformer of ecclesiastical discipline. The traditional rights attributed to the Church, such as education and the institution of marriage itself, were absorbed by the State.

The confiscation of the Church’s patrimony, the suppression of convents and seminaries, the new partition of dioceses, the minute regulation of worship, the State’s doctrinal influence in the formation of clergy in favour of heterodox currents, allowed for the Hapsburg Monarchy to reach its height in its process of secularization. “Under this philosophical government” – the Swiss philosopher Carl Ludwig von Haller accuses in a famous piece – there was nothing more of the sacred; neither property, nor natural law, neither promises, nor contracts, nor civic-law”(La restaurazione della scienza politica, tr.it., Torino, Utet 1963, vol. I, p. 280).

The difference between yesterday and today is that, then, secular politics were led by strong governments, at times with the collaboration of bishops, but always against the See of Rome. And the Popes strongly condemned these politics. Today, on the other hand, similar policies are being conducted by weak and incompetent governments, frequently with the collaboration of some bishops but always with the tacit approval of the Roman authorities. Indeed, all it would take was a clear word from Pope Francis to undo these anticlerical maneuvers and give back a voice to “the people of God”, who, after the Coronavirus, appear, not subject, but more vibrant and ready for resistance than it ever was before.

In an environment of growing confusion, the “confinement” of the Sanctuary at Fatima by the National Guard of Portugal is something just as scandalous as the closure of the pools at Lourdes on March 1st of this year. The main responsibilities for this scandal though, do not lie with the Portuguese military, but with the ecclesiastical authorities, starting from Cardinal Marto, Bishop of Leiria-Fátima, who offered, or perhaps asked, the civic authorities, for help, in forbidding pilgrimages on the anniversary of the Fatima Apparitions.

The present-day spirit of submission to the world and its powers by Portuguese bishops and Pope Francis himself, gives us a glimpse of how, in the future, these men of the Church will be ready to submit to Islam, accepting to live under the regime of the sharia, or of total subordination to those who would wish to make of Europe, the land of Mohamed. The case of Silvia Romano, the Italian voluntary worker kidnapped in Kenya on November 20th 2018 and freed in Somalia on May 8th 2020, is emblematic. Silvia Romano, who was in Kenya with an NGO, after 18 months of imprisonment, reappeared as a convinced believer in the Koran. The Church in her neighborhood, welcomed her back with the ringing of bells. For her parish-priest, evidently, apostasy, is a lesser evil than the good of regained freedom.

And today, alongside health, freedom against all forms of restriction, appears to be the supreme good for everyone. In the case of Silvia Romano, there has been talk of “the Stockholm Syndrome”, that particular state of psychological dependence manifesting itself in many victims who have suffered episodes of violence. But today the Stockholm Syndrome seems to be the psychological and moral condition of the Vatican and a great part of the Episcopal Conferences, in the face of the secular-Masonic power of the West and Islam gaining foothold.

This is aggravated by the fact, that, precisely at Fatima, the Blessed Virgin asked for prayer and penitence, both private and public, to ward off the chastisements looming over the world. However, on May 13th, the Sanctuary of Fatima, like that of Lourdes and like St. Peter’s Basilica at Easter, will be eerily empty. How can we fail to see in these symbolic events the imminence of the great chastisements that Our Lady Herself preannounced at Fatima? The prohibition of faithful Catholics in showing their devotion to Our Lady publically at Her Sanctuary, draws closer these chastisements, perhaps already instigated with the Coronavirus. Forgetting the imminence of these chastisements in order to follow the “plague spreaders”, may carry us into a dangerous labyrinth.

Those who forget the reality of the hand of God during the calamities of history, reveal that they don’t love Divine justice and those who don’t love the justice of God, risk being undeserving of His mercy. And the “confinement” of the Sanctuary of Fatima, more than the closure of a place, appears to be like the silence imposed on a message.

The “confinement” of the Sanctuary of Fatima was last modified: Maggio 15th, 2020 by Redazione
Tweet