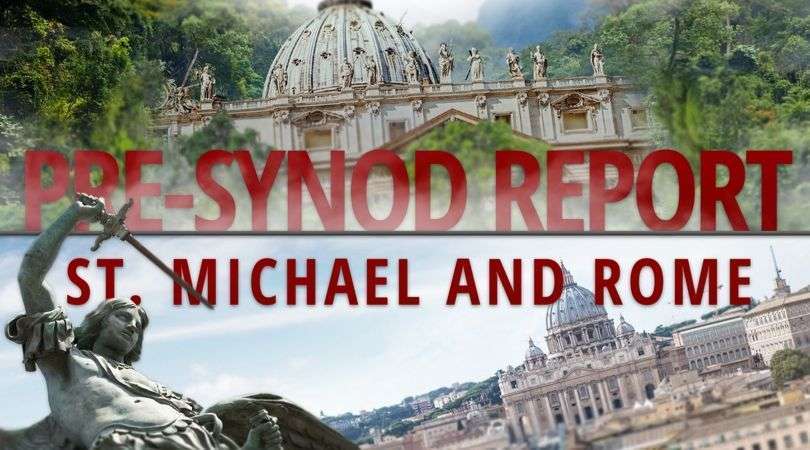 (Michael Voris, S.T.B. Church Militant – September 30, 2019) In the run-up to the synod, while we are in Rome, we are going to bring you a series of reports to help you better understand the stakes.

The Church’s history obviously stretches back 2,000 years, and much of that history has revolved around critical moments here in Rome.

One such moment was in the year 591 near the beginning of the reign of Pope St. Gregory the Great.

Gregory became pope in the first place because his predecessor had died of a virulent plague sweeping through Rome and the surrounding area, claiming a large number of lives.

Additionally, the population of the Italian peninsula was severely decreasing because of the Gothic War, and the Lombard Germanic tribe was able to sweep into a region of Italy and establish a kingdom.

The Germans who came to Italy were largely Arians and pagans, just as many of the German hierarchy appear to be today.

Famine was rampant, and in addition to this was a series of violent earthquakes.

Flooding was frequent, including of the Tiber, and from this flooding, swamps developed and plague spread throughout the city.

The plague would strike with such speed and ferocity that people would often die very shortly after contracting it.

The custom of saying “God bless you” to someone when he sneezes actually developed at this time because sneezing was a sign that a person had contracted the plague.

This was the Rome of which Gregory ascended the throne of Peter in 590.

Realizing that what Rome was suffering was a punishment from God for mass immorality of the people, Gregory soon organized a procession to begin at dawn on April 25.

The faithful gathered in small groups all around Rome and then began processing to the Basilica of St. Mary Major. History records that the plague was so severe that during the processions, 80 people actually dropped dead.

Pope Gregory met them as they arrived at the Basilica and joined in the procession, carrying aloft the miraculous image of Our Lady painted by St. Luke.

The procession wound through the city following closely along route of the Tiber. The crowd was singing and intoning the Litany of the Saints.

When the litany was done, and as the procession approached the Vatican, Pope Gregory looked up upward and saw St. Michael appearing over Hadrian’s mausoleum, what is today Castel Sant’Angelo.

Accompanying St. Michael were numerous other angels, and when St. Michael sheathed his flaming sword, a sweet perfume filled the air signaling the end of the plague.

Those in the procession witnessed the angels begin singing the “Regina Coeli” to the Blessed Virgin Mary, who was seated on a throne above Michael and the angels.

The entire event is commemorated by the statue of the glorious archangel who, notice, is not plunging his sword into the dragon as most art shows, but back into its sheath.

So what significance does this 1,400-year-old event hold for us today?

Well, to begin with, the need to recognize that what is needed here in this plague of doctrinal impurity is greater devotion, not just in general but to St. Michael and Our Blessed Mother; secondly, that what is going on in the Church is a punishment for the unfaithfulness of so many Catholics; thirdly, that there is no human way to bring this to a fruitful conclusion — that we must do our part, just as the citizens did in procession in Gregory’s day, but that it is God Himself through the heavenly powers that will resolve this evil engulfing the Church.

That in no way excuses the laity from confronting and doing our part to announce the truth and expose the evil — this is always an obligation.

In fact, it was, providentially, Gregory the Great himself who declared in his homilies on Ezekiel, “It is better that scandals arise than the truth be suppressed.”