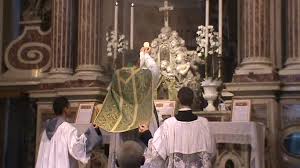 (by Roberto de Mattei) The “case” of the Franciscans of the Immaculate re-proposes a question of canonical order, both moral and spiritual, which often surfaced and at times “exploded” in the post-conciliar years: the problem of obedience to an unjust law. A law may be unjust not only when it violates the divine and natural law, but also when it violates an ecclesiastical law of greater importance. This is the case with the Decree dated July 11th 2013, by which the Congregation for the Institutes of consecrated life established the “commissioning” of the Franciscans of the Immaculate.

The flaw in the law is not in the “commissioning,” but in that part of the Decree which obliges the Franciscans of the Immaculate to renounce the Mass according to the ancient Roman rite. There exists in fact, apart from the Bull Quo primum of St. Pius V (1570), the motu proprio of Benedict XVI Summorum pontificum (2007), that is, a universal law of the Church, which grants to every priest the right to “celebrate the Sacrifice of the Mass following the typical edition of the Roman Missal, which was promulgated by Blessed John XIII in 1962 and never abrogated, as an extraordinary form of the Church’s Liturgy.” Art. 2 of the Motu Proprio specifies that it is not necessary for a priest to have any permission either from the Apostolic See or from his Ordinary, for the Masses celebrated sine populo. Art. 3 adds that “not only the individual priests, but also Institutes of Consecrated Life and Societies of Apostolic Life, whether of pontifical or diocesan right, who wish to celebrate the conventual or community Mass in their own oratories, may do so.” If an individual community or an entire Institute or Society wishes “to have such celebrations frequently, habitually or permanently, the matter is to be decided by the Major Superiors according to the norm of law and their particular laws and statutes.” There is no need, in this case, to refer to the principles of divine and natural law, but it is enough to refer to canon law. An eminent jurist like Peter Lombardi (1930-1986) remembers how canon 135, paragraph 2, of the new Canon Law, sanctions the principle of the legality of law-making, in the sense that “the legislative power is to be exercised in the way established by the law,” especially by canons 7-22, which constitute the document dedicated to the Code of the ecclesiastical Laws (P. Lombardi, Lessons of Canon Law, Giuffré, Milan 1986, p. 206).

The Code reminds that universal ecclesiastical laws are those which “are promulgated by publication in the Acta Apostolicae Sedis” (can. 8); that these are “binding everywhere on all those for whom they were enacted” (can. 12 – §1); it specifies that “the laws which prescribe a penalty, or restrict the free exercise of rights, or contain an exception to the law, are to be interpreted strictly” (can. 18); establishes that “A later law abrogates or derogates from an earlier law, if it expressly so states, or if it is directly contrary to that law, or if it integrally reorders the whole subject matter of the earlier law” (can. 20); affirms that “In doubt, the revocation of a previous law is not presumed; rather, later laws are to be related to earlier ones and, as far as possible, harmonised with them” (can. 21). Art. 135 lastly establishes the fundamental principle of the hierarchy of the norms in virtue of which “on the part of the inferior legislator, there can not validly be given a law contrary to the superior law.” Not even a pope can abrogate an act of another pope, except in the proper way. The incontestable rule, of a juridical and moral order, is that the law deriving from a superior command, which regards a subject of greater and more universal importance, and which possesses a more manifest right, prevails (Regis Jolivet, Treatise of Philosophy. Moral, vol. I, Morcelliana, Brescia 1959, pp. 171-172).

According to Canon 14, moreover, the canonical norm, in order to be obligatory, must not be susceptible to any doubt of the law (dubim iuris), but be certain. When the certainty of the law is lacking, the axiom lex dubia non obligat comes into force. When we are faced with a doubt, the glory of God and the salvation of souls prevails over the concrete consequences which the act bears, on a personal level. The new Code of Canon Law reminds in its last canon, in fact, that in the Church, there must always be “suprema lex” the “salus animarum” (can. 1752). This was already taught be St. Thomas of Aquinas: “the aim of canon law tends to the peace of the church and the salvation of souls” (Quaestiones quodlibetales, 12, q. 16, a. 2) and all the great canonists repeat this.

In the discourse on “salus animarum” as the principle of the canonical system, given on April 6th 2000, Cardinal Julián Herranz, President of the Pontifical Council for the Legislative Texts, has reaffirmed how this is the supreme principle ordering canonical legislation. All this presupposes an articulate reflection, which is absent from the discussion, because often one forgets the moral and metaphysical foundation of the law. Today there prevails a merely legalistic and formulistic conception, which tends to reduce the law to a mere instrument in the hands of he who has the power (cfr. Don Arturo Cattaneo, Ecclesialogy of Canon Law, Marcanium Press, Venice 2011).

According to the juridical positivism which has penetrated within the Church, what the authority promulgates is right. In reality the Ius divinum is the foundation of every manifestation of the law and presupposes the precedence of the jus with respect to the lex. Juridical positivism inverts the terms and substitutes the exercise of the lex for the legitimacy of the jus. In the law, one sees only the will of he who governs, and not the reflection of the divine law, by which God is the foundation of all the laws. He is the living and eternal Law, the absolute origin of all laws (Cfr. Ius divinum, edited by Juan Ignacio Arrieta, Marcianum Press, Venice 2010).

It is for this reason that, in the case of a conflict between the human and divine law “it is necessary to obey God rather than men” (Acts 5:29). Obedience is due to superiors because they represent the authority of God, and they are representatives of it in as much as they guard and apply the divine law. St. Thomas affirms that it is better to face immediate excommunication from the Church, and go into exile in far off lands, where the secular arm does not reach, rather than obey an unjust command: “ille debet potius excommunicatione, sustinere (…) vel in alias regiones remotas fugere” (Summa Theologiae, Suppl., q. 45, a. 4, ob. 3). Obedience is not only a formal precept which urges one to submit oneself to human authorities: it is above all a virtue which leads one to perfection. He embraces obedience perfectly who does not obey out of self-interest, servile fear, or human affection, but who chooses true obedience, which is the union of the human will with the divine Will. For love of God, we must be prompt to make those acts of supreme obedience to His law and His Will which free us from the bonds of a false obedience, that runs the risk of causing us to lose the faith. Unfortunately today there is in force a wrong understanding of obedience, bordering, at times, upon servility, in which fear of the human authority prevails over the affirmation of the divine truth.

Resistance to unlawful commands is at times a duty, towards God and towards our neighbour, which necessitates gestures of an exemplary metaphysical and moral density. The Franciscans of the Immaculate have received and welcomed from Benedict XVI the extraordinary gift of the traditional Mass, incorrectly called “tridentine,” which today thousands of priests lawfully celebrate in all the world. There is no better way to express their gratitude to Benedict XVI for the gift received and to manifest at the same time their own feeling of protest against the injustice sustained, than to continue to celebrate with a peaceful conscience, the Holy Sacrifice of the Mass according to the ancient Roman rite. No contrary law obliges them in conscience. Perhaps few will do this, but yielding, in order to avoid greater evils, will not serve to distance the storm which rages over their institute and over the Church. (Roberto de Mattei)

By John Smeaton This is the first in a new series of articles, rooted in the teaching of Divini Illius Magistri, which seeks to assist parents in preparing their children to live as mature Christians in dangerous times. Today, a toxic world environment — including, sadly, within the institutional Church — sees Catholic teaching on marriage…