COVID-19 Has Changed the Way Europeans Go to Mass — For the Wo...

The next Pope and Vatican Diplomacy

Could roots of Vatican II council result in a church that leaves... 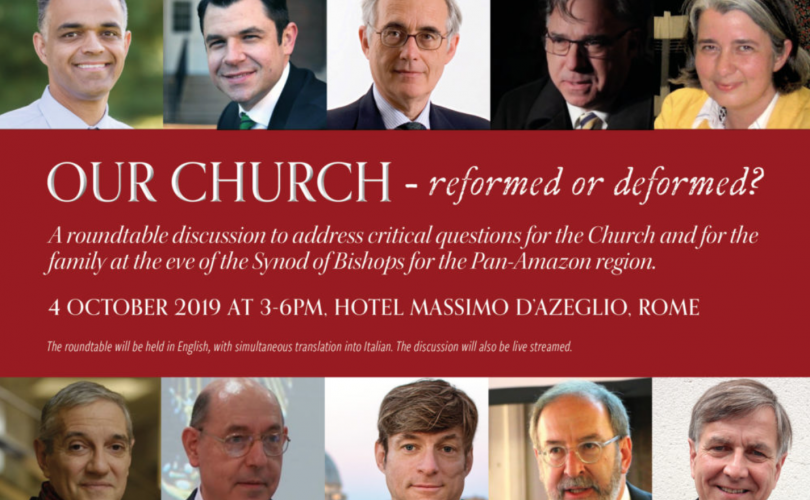 (Life Site News – July 25, 2019) Lay Catholic leaders from across the world will gather in Rome in October for a roundtable discussion on the questions facing the upcoming Synod of Bishops for the Pan-Amazon region.

The event, hosted by the international pro-life association Voice of the Family, is titled “Our Church – reformed or deformed?” It will be held Friday, October 4 from 3 to 6 p.m. at Hotel Massimo D’Azeglio.

Over the past several months, faithful Catholics have grown increasingly concerned with the Amazonian Synod. Secret meetings as well as public statements by liberal clergy indicate women’s ordination and married priests are two issues they will likely seek to introduce.

Cardinal Walter Brandmüller, one of the two remaining dubia cardinals, called the working document for the Synod “heretical” and an “apostasy” from Divine Revelation. Other prelates, like Cardinal Raymond Burke and Bishop Athanasius Schneider, have spoken out on the need to defend Church teaching on priestly celibacy at the Synod.

Participants in the roundtable discussion, which will be moderated by John Smeaton, chief executive of the Society for the Protection of Unborn Children (UK), include:

In its press release announcing the roundtable discussion, Voice of the Family states that “throughout the preparations for the upcoming Pan-Amazon synod, there flows a continuous thread of ideas which, taking advantage of the various synod proceedings, propose a ‘new church’ and a new concept of society.”

At this stage of the so-called synodal process, the vision of the “new church” seems to aspire to a decentralised church that ceases to be universal. Such an umbrella-church could enfold a variety of beliefs and pastoral practices which may either support, obscure or choose to be silent about the perennial truths taught by the Church universally for 2,000 years.

The vision of civic society in these synods seems to aspire to a Marxist-inspired model promoting an egalitarian and ecologically minded society – a vision which draws its spiritual foundation from Pope Francis’ encyclical Laudato si, proposing that care for “our common home” be at the heart of our religious and moral life.

The roundtable discussion will be held in English, with simultaneous translation into Italian. The session will also be live streamed. Details will be available on Voice of the Family’s website and on LifeSiteNews.com in the weeks and months ahead.