The roman spirit: This is what we need! 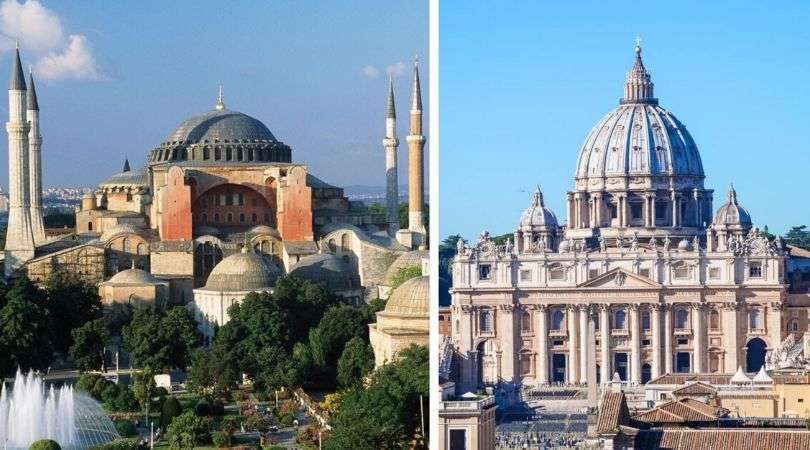 (Jules Gomes, ChurchMilitant.com – July 13, 2020) A distinguished Italian historian is warning that radical Islam’s goal is to conquer Rome now that it has reoccupied the ancient Byzantine basilica of Hagia Sophia.

On Sunday, after mounting international pressure to condemn the Islamic takeover of Hagia Sophia, Pope Francis said: “I think of Hagia Sophia, and I am very saddened” — a statement that was criticized as “manifesting a studied ambiguity.”

“Pope Francis said he was saddened by the transformation of the Hagia Sophia museum into a mosque, but what else should he have expected from Sultan Erdoğan?” asked de Mattei, author of Turkey in Europe: Benefit or Catastrophe?

For years, Turkish President Recep Tayyip Erdoğan has been insisting that Turkey enter Europe in order to Islamize it, the Catholic historian emphasized.

Rome is the ‘Red Apple’

“The ultimate goal of the Turkish conquests, according to an ancient tradition, is called ‘the Red Apple’ (Kizil-Elma).  This is the name used to denote the golden globe supported by the statue of the Emperor Constantine in Constantinople.”

“After the conquest of Constantinople in 1453, Rome became the ‘Red Apple,’ the ultimate objective of the Muslim Ottomans and the symbol of the triumph of Islam over Christianity. This demand has not weakened over time,” he warned.

“Pope Francis visited Hagia Sophia in November 2014 on his trip to Turkey. Shortly before, he visited the Sultan Ahmet — also known as the Blue Mosque — in Istanbul with the Grand Mufti, to pray in silence and barefoot.”

“Could it be that the pontiff hasn’t learned anything from this trip?” asked de Mattei, director of the Lepanto Foundation.

Professor de Mattei cited world-renowned Islamic scholar Sheikh Yusuf al-Qaradawi, chairman of the International Union of Muslim Scholars and media celebrity, “who has been hugely influential on large swaths of contemporary Islam through his appearances in the media and on the internet.

Qaradawi explains: “The city of Hirquid was conquered in 1453 by the young Ottoman emperor of 23 years of age, Mohammed bin Murad, known to history as Mohammed the Conqueror. The other city, Rome, remains and we believe and hope [that she too will be conquered].”

He adds: “This means that Islam will return to Rome conquering and victorious after having been expelled twice, once from the South, from Andalusia, and a second time from the East when it knocked several times at the gates of Athens.”

According to de Mattei, “The same al-Qaradawi, in a fatwa promulgated on Feb. 27, 2005, declared: ‘Notwithstanding the pessimism among Muslims, in the end Islam will govern and will be the head of the whole world.'”

“One of the signs of the victory will be that Rome will be conquered, Europe will be occupied, the Christians will be defeated and the Muslims will grow in number and become a force which will control the whole of the European continent,” al-Qaradawi announced.

Islam ‘Coming for the West’

Meanwhile, historian of Islam Robert Spencer is also alerting the West to Erdoğan’s plans for Islam’s march on the West.

“Erdoğan is signaling his aspiration to restore the caliphate, the single unified Islamic government to which, in Sunni Islam, all Muslims owe allegiance,” Spencer wrote in a column for PJ Media.

“The last caliphate was abolished by the secular Turkish government in 1924. Now that Erdoğan has just about completed his work of destroying Turkish secularism, he is moving more directly than ever to re-establish the caliphate that the secularists themselves destroyed,” observed Spencer, author of Onward Muslim Soldiers: How Jihad Still Threatens America and the West.

Hagia Sophia stood as a symbol of the triumph of Islam over Christianity, and of the power of the Ottoman Empire. Erdoğan is positioning himself as a new Mehmet [the Conqueror], destroying the monument to secularism that the Hagia Sophia museum has been since 1935, and emulating his illustrious predecessor by converting it to a mosque once again.

Following the Council of State verdict Friday to turn Hagia Sophia into a mosque, Erdoğan vowed to “liberate al-Aqsa mosque” from Israel.