(Maike Hickson, Life Site News – October 24, 2019) Cardinal Gerhard Müller has issued a strong statement against the erection of “idols” in a Roman church for the Amazon Synod.

In a short excerpt published tonight of a longer interview with Raymond Arroyo for his The World Over show on EWTN, Cardinal Müller states that “to bring the idols into the Church was a grave sin, was a crime against the divine law.”

Müller is the former Prefect of the Congregation for the Doctrine of the Faith.

These comments were made after Arroyo mentions the fact that there have been people who have removed the controversial pagan idols from the Church of Santa Maria del Traspontina and then threw them into the Tiber River, asking Cardinal Müller for comment.

“The great mistake was to bring the idols into the Church,” replies the cardinal, “not to put them out, because according to the Law of God Himself – the First Commandment – idolism [idolatry] is a grave sin and not to mix them with the Christian liturgy.”

“To put it out,” Müller continues, “to throw it out, can be against human law, but to bring the idols into the Church was a grave sin, a crime against the Divine Law.”

“That is a deep difference.” 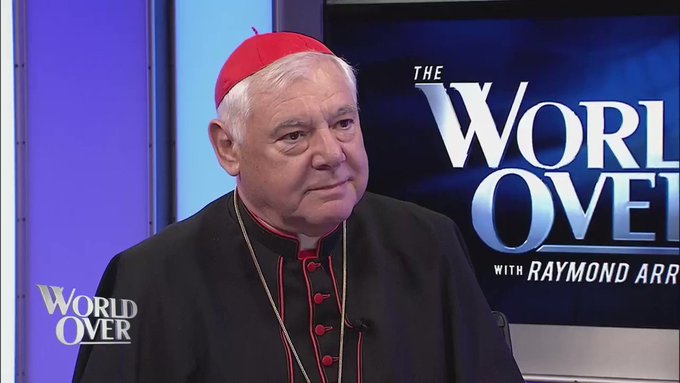 The German cardinal just recently had made some strong comments against the paganism that can be seen at the Amazon Synod. In a commentary written for LifeSiteNews, he regrets that “not even bishops realize when the border to the old paganism has been crossed” and explains that idolatry and superstition is “a sin against God because it confuses the Creator with His Creation.”

“The adoration of God,” he explains, “is the true theology of liberation from fear, fright, and insecurity which come to us from the material world and our fellow men. And only with the help of the Gospel and Christ’s Grace can a culture develop its positive influence and be freed from the power of evil.”

Cardinal Müller then also recalls the words spoken by Saint Peter: “You are Christ, the Son of the living God.”

by George Weigel In the early 1990s, I met Kirill, now Patriarch of Moscow and All Rus’, when the man christened Vladimir Mikhailovich Gundyayev was chief ecumenical officer of the Russian Orthodox Church. The occasion was a dinner hosted at the Library of Congress by the late, great James H. Billington, whose history of Russian culture, The…

by Cristiana de Magistris One day, when St Francis de Sales was speaking with Giampietro Camus, the bishop of Belley, (an admirer and spiritual son of his, on whom he had also conferred the episcopal ordination), the saint had this to say: “Be careful not to deceive yourself, because one can be very devout and, at the same…

By CNA Staff Washington, D.C. Newsroom, May 8, 2022 / 07:08 am Catholics across the U.S. kept a wary vigil Sunday for pro-abortion activists to follow through on a threat to disrupt Masses on Mother’s Day. While the weekend proved mostly peaceful, there were incidents of violence, vandalism, and aggression in some parts of the…

By Andrea Gagliarducci Last week, a meeting of the committees of the Synod on Synodality, which Pope Francis convened for 2023, was held in Rome. It was a meeting to set up a common path, talk to each other, and begin to concretize what should be a Synod that will give a new face to the…

Roberto de Mattei, historian and former vice president of the National Research Council, directs the Fondazione Lepanto, the monthly Radici Cristiane, and the press agency CorrispondenzaRomana. After recalling that no one can sing victory over a pile of rubble, Pope Francis reiterated that war destroys both winners and losers. These are the positions of the realist school of international relations:…

La mia vita appartiene a me?

La mia vita appartiene a me?

Can one be devout and wicked at the same time? The answer of St Francis de Sales