Steps from Vatican, 200 Catholics implore the angels to banish demons ahead of Amazon Synod 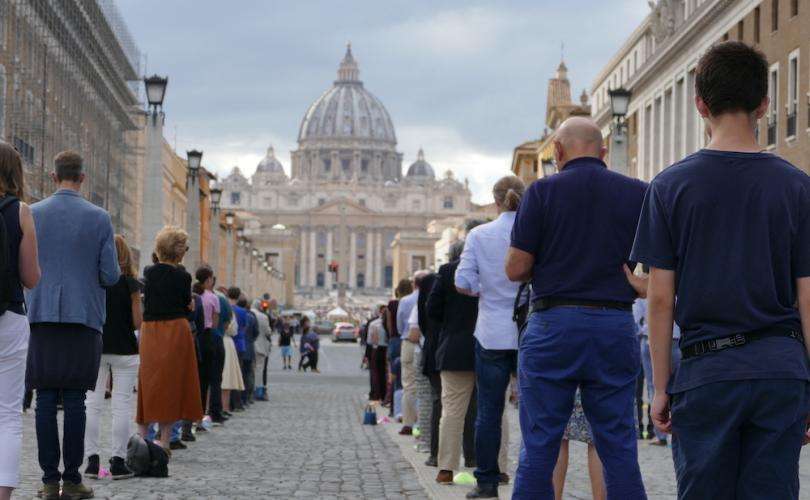 (Diane Montagna, LifeSiteNews – September 28, 2019) Flanked by banners of the four evangelists, and gathered under the patronage of the Blessed Virgin Mary, an international coalition of 200 Catholic laity on Saturday assembled in silence near St. Peter’s Square, to pray “as a united army against the enemies of God and the Church.”

Standing at the foot of Castel Sant’Angelo on the eve of the liturgical feast of St. Michael the Archangel, the international lay coalition launched an “appeal to the angels against the evil spirits,” ahead of the Amazonian Synod being held at the Vatican Oct. 6-27.

LifeSite has learned that another act of spiritual warfare was taking place in Rome contemporaneously with the Acies Ordinata. At 3:30 pm, priests privately prayed Pope Leo XIII’s Prayer of Exorcism (the longer prayer to St. Michael) in a church near Castel Sant’Angelo, with the intention of expelling the “diabolical influence from the Vatican, especially in view of the Amazon Synod.”

The international coalition is called Acies ordinata. Its name, which Catholic tradition reserves for Mary Most Holy who assembles an army of the faithful to defeat her enemies — terribilis ut castrorum acies ordinate— is taken from the Old Testament canticle, the Song of Songs (6:3, 6:10).

The coalition, organized by the Rome-based Lepanto Foundation and comprised of some of the most influential movements and Catholic sites, included men and women, young and old, quietly deployed in St. John XXIII Square, ordered in rows of 20 x 10.

For one hour they stood in silence, reciting the Rosary and reading classic texts from the Catholic tradition, such as the Gospels, the Catechism and the writings of the saints.

At the conclusion of the Acies ordinata event, participants chanted the Credo, as sunshine broke through a cloudy Roman sky.

The event was held one week before the Oct. 6-27 Synod on the Amazon opens at the Vatican. The preparatory documents for the Synod have drawn both controversy and criticism from cardinals and bishops of the Catholic Church. German Cardinal Walter Brandmüller openly saying it contains “heresy” and approaches “apostasy.”

The Sept. 28 Acies Ordinata is the second gathering to be held in Rome. The first was held ahead of the Vatican clerical sex abuse summit in February, to “oppose the Vatican’s policy of silence about homosexuality.”

Participants with historic ties to the papacy

The symbolic value of today’s Acies Ordinata was increased by the presence of participants whose families have deep historic and religious ties to the Holy See and to the papacy.

One of the participants was Count Giovanni Piccolomini. In comments to LifeSite, he said that his ancestors include two popes, Pius II and Pius III, one General of the Jesuit Order, several bishops and cardinals, military leaders and scientists.

Count Piccolomini said what motivated him to participate in the Acies Ordinata event was his “wish to reiterate my and our fidelity to the Pope, the Catholic Apostolic Roman Church and its eternal teaching.”

Asked about the symbolic significance of praying at the foot of Castel Sant’Angelo, he said “this castle saved the lives of more than one pope in the past, and its name indicates our wish to invoke the whole celestial militia to defend the Catholic Church.”

“Our and my personal hope,” he said, “is that our prayers may be heard in heaven and that many around the world will show their firm belief and love for the Catholic Church.”

“During the seventeeth through nineteenth centuries, only Pfyffers were commanders of the Swiss Guard,” he told LifeSite. But, he added, “independently from this, we have always been taught by our parents to have great respect for our holy religion. I can therefore assure you that my family history is not essential to the commitment we have to the Church.”

Asked what motivated him to participate in the Acies Ordinata, Pfyffer said “the Church has long been threatened on every side and we, as simple lay people, have to react.”

“The Acies Ordinata event is excellent,” he said. “We are unarmed and yet we feel that it is extremely important to respond. Otherwise, the enemies of the Church will believe that they can do anything.”

“There spiritual means of engaging in the battle. St. Michael is in charge of protecting the holy Church and will help, if he is asked,” he added. “When the apostles were in the boat being tossed by the waves, they cried out to the Lord, ‘Lord, we are perishing.’ Jesus Christ will help us, there is no doubt. But we have to do our part, even if it is not easy,” he said.

Castel Sant’Angelo, which sits just opposite of the Via della Conciliazione leading to the Vatican, also has deep historic significance, making it a fitting place for the Acies Ordinata event.

Castel Sant’Angelo was the pagan mausoleum of the pagan Emperor Hadrian who destroyed the city of Jerusalem in 135 A.D. and replaced it with the pagan city of Aelia Capitolina.

In 590 A.D., according to tradition, Gregory the Great carried the icon of the Salus Populi Romani in procession on Easter Sunday morning implored the mercy of God upon Rome which was being devastated by a massive plague. As he approached the mausoleum of Hadrian, setting foot about upon the Pons Aelius, the bridge which still stands to this day joining the mausoleum to the city of Rome, he saw in a vision the Archangel Michael standing upon the edifice with drawn sword of vengeance. The Archangel looked at the icon of our lady and exclaimed: “Regina caeli, Laetare, alleluia; Quia quem meruisti portare, alleluia; Resurrexit, sicut dixit, alleluia.” And Gregory the Great shouted out: “Ora pro nobis, Deum, alleluia.” The angel sheathed his sword of vengeance, and the plague ended.

In the Middle Ages, the mausoleum, renamed the Castel Sant’Angelo, became a favored place of refuge for the Roman pontiffs in the face of frequent riots and German invasions that vexed the medieval popes. The Acies Ordinata event, held on the vigil of the Sept. 29 liturgical feast of St. Michael the Archangel, combines all these elements: a penitential procession, a demonstration by outraged Romans (and other Catholics from across the world), and opposition to a German invasion at the upcoming Amazonian Synod.

In a statement issued today, organizers of the Acies Ordinata event said: “Our rally is made up of lay Catholics coming from many different nations, who are above all asking the Lord to gather together all those who are fighting for a good cause, with the purpose of forming a united army against the enemies of God and of the Church.”

“Here at the foot of Castel Sant’Angelo, the fortress which so often has defended the papacy throughout its history, we call upon the help of the angels, and above all Saint Michael, the prince of the heavenly host, asking them to protect the defenders of the Church and Christian civilization and to scatter their enemies.”

“Confusion, which is the smoke of Satan, is enveloping the battlefield. In order to defeat the forces of chaos what is necessary is purity of doctrine, clarity of words, firmness of example, accord of soul and of works,” the statement continued.

“In order for this to happen, let us call upon the Blessed Mother, Queen of the Angels, asking her to make us in her image, today and always, into an Acies Ordinata (Song of Songs 6:3,9), an army ready to fight, with that tranquility which is born from the peace of Christ which is in our hearts and which we wish to extend to the whole world.”

Steps from Vatican, 200 Catholics implore the angels to banish demons ahead of Amazon Synod was last modified: Settembre 30th, 2019 by redazione
Tweet