A Mob in the Agora, But Prayer in the Square. An interview with Gabriele Kuby - Corrispondenza romana
Vai al contenuto

Home › International News› A Mob in the Agora, But Prayer in the Square. An interview with Gabriele Kuby

A Mob in the Agora, But Prayer in the Square. An interview with Gabriele Kuby 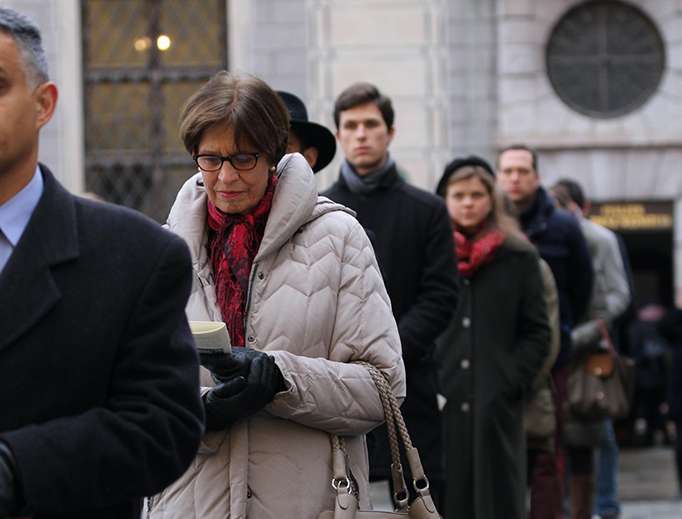 (Edward Pentin, National Catholic Register – January 23, 2020) Around 130 invited lay faithful took part in a silent prayer demonstration in Munich at the weekend to call on Pope Francis and Germany’s bishops for “clarity and coherence” and an end to “dissimulation and deception.”

One of those taking part in the event, which was timed to coincide with the beginning of a controversial two-year synodal path in the German Church, was the German Catholic writer, sociologist and expert in the problems of gender ideology, Gabriele Kuby.

In this Jan. 18 interview with the Register, Kuby explains how important the demonstration was for Germany, why she believes it is important to resist current changes, and that sacrifices need to be made to defend the Church from those within who, she says, are primarily concerned only about power.

What is your evaluation of the Acies Ordinata (the Jan. 18 demonstration) in Munich?

I’m very happy about this event. It’s like a blood infusion for Germany from people who have no fear of saying the truth. They’re not crippled by political correctness and fear — “Deutsche Angst” — and so are not deterred from standing on the front line and saying the truth.

What form should that commitment take?

What [Austrian Catholic activist] Alexander Tschugguel said is right: We need to become aware that we must make sacrifices. We won’t make any difference as long as we try to protect ourselves. And if we are always behind the frontline in order to avoid any backlash — even if it’s just a little bit behind the frontline — it means the adversary can always progress.

In other words, the faithful must be prepared to raise their heads above the parapet?

Right. Of course, not with blindness. We all have a certain role and position from where to speak and act. As Jesus says, we have to be as wise as serpents and as innocent as doves. Also, although I fully supported this event, one or two participants became too aggressive in their rhetoric and this is another danger to avoid.

What sort of impact do you think it will have?

I don’t know. We are beyond the place where good arguments really make a difference. It’s only about power and money, sadly, not only in politics, but also often in the Church. The Synodal Process is carefully designed to manipulate the consciousness of believers into acceptance of a new Church that adapts to the demands of the sexual revolution.

The bishops have given 50% of their authority in decision-making to the Zentralkomitee der Deutschen Katholiken [the German Church’s largest lay group] which has pushed for liberalisms for as long as I can remember. Since the majority of the bishops are also “Marxists” [supporters of German Cardinal Reinhard Marx], the outcome will be as intended: change in the perennial teaching of the Church in matters of priesthood — celibacy and women’s ordination — and sexual morals. We’re beyond the state where we have an agora where we can actually search for the truth together.

What can be the next step forward then, if arguments and protests aren’t enough?

I’m not a strategist. I’m an individual who tries to speak the truth. I think every person has their place and role. We have talents, certain positions in society, and we have to become obedient in listening to the Holy Spirit.

What do you say to those who argue that it is those protesting in Munich who need to listen more to the Holy Spirit who is guiding the Church toward a more “synodal” Church that listens more to the world?

Frankly, I prefer to listen to the unchangeable word of Christ and the saints. This kind of seemingly spiritual advice is a manipulative sowing of confusion.

A Mob in the Agora, But Prayer in the Square. An interview with Gabriele Kuby was last modified: Gennaio 27th, 2020 by Redazione
Tweet