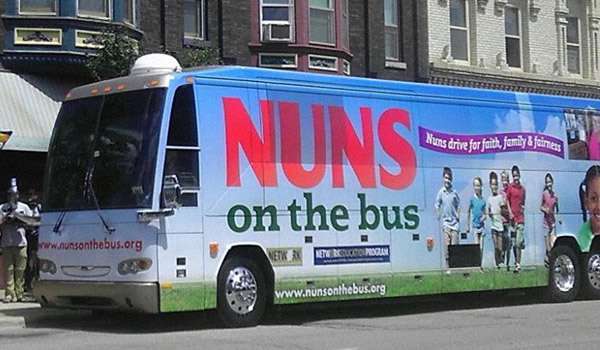 (By George Weigel, National Review Online)  The Sisters of Life were founded in 1991 by Cardinal John O’Connor and Mother Agnes Mary Donovan (a former Columbia psychology professor and clinician) as a new religious community of women dedicated to the defense of life at all stages and in all conditions. The Sisters of Life are wholly orthodox and wear the kind of modernized (and in their case, quite beautiful) religious habit envisioned by the Second Vatican Council. And unlike the religious orders represented by this summer’s “Nuns on the Bus” road show, which culminated in Sister Simone Campbell’s attempt to excommunicate Representative Paul Ryan at the Democratic National Convention (an effort that was, as President Obama might say, above Sister Simone’s pay grade), the Sisters of Life are growing, often attracting new recruits among highly educated and accomplished professional women.

A few weeks ago, two Sisters of Life were stopped on a New York street by a man who, seeing their habits and imagining that all nuns think (and dress) alike, rushed up and asked the sisters if they, too, weren’t proud of Sister Simone. The two sisters politely explained why they were emphatically not proud of Sister Simone and took the opportunity to explain the Church’s pro-life teaching, which Sister Simone had declined to endorse in Charlotte when pressed by a reporter.

A small vignette, you might say. But Sister Simone’s 15 minutes of fame, which were the culmination of a series of distortions and plain mistruths advanced by “progressive” Catholics for months, seem now to have been something of a clarifying moment. And those two Sisters of Life in New York aren’t the only ones willing to explain, politely but firmly, that Sister Simone, Catholic University’s Stephen Schneck, and others in the Obama Amen Chorus are severely misrepresenting Catholic social doctrine, both in general and in their specific attacks on vice-presidential candidate Ryan.

Advertisement
Take, for example, a striking post–Red Mass talk given in Green Bay, Wis., on Thursday, September 20, by Bishop Thomas J. Paprocki of Springfield, Ill., who holds doctorates in both civil and canon law. (The “Red Mass” is a Catholic tradition dating back to early medieval times: a special Mass for the opening of the judicial year, which in many dioceses has now been expanded into a Mass of special prayer for legislators and other public officials as well as for judges and attorneys. The patron of the Red Mass tradition is, fittingly enough, St. Thomas More, who famously died “the king’s good servant, but God’s first,” in witness to the truth about religious freedom in full.)

Bishop Paprocki opened his remarks in Paul Ryan’s home state by noting that the Church’s longstanding teaching on the obligation of Catholic citizens to “work for justice and promote the common good” is “especially meaningful in a democratic society like ours, where a government by, of, and for the people possesses limited constitutional authority to care for the common good, and where the balance [of that responsibility] is entrusted to the care of non-governmental institutions, including churches and other religious groups” — a mini-lesson in American constitutionalism on which HHS and its Catholic apologists might usefully reflect.

The bishop then made the crucial distinction, so often blurred by partisans like Sister Simone and the rest of Catholics for Obama, between the “binding principles” and the “prudential judgments” of Catholic social teaching. And those “binding principles,” Paprocki reminded his audience, weigh heavily on politicians such as Joe Biden, Nancy Pelosi, and John Kerry, who invoke their Catholicism and their devotion to American pluralism in support of their cave-in to the pro-abortion forces in American politics (and their ample wallets). It is true, Paprocki readily conceded, that “the distinctions between binding principles and prudential judgments are not always clear and absolute.” But sometimes they are: “For example, there is no circumstance or context in which it could be just to deprive any class of persons of the legal protection for their lives which other classes of persons enjoy. Because support for what many today call ‘pro-choice’ laws about abortion necessarily involves willing this departure from legal equality which justice requires, the ‘pro-choice’ position is always gravely wrong.”

Bishop Paprocki then made clear that recent letters from committee chairmen at the U.S. Conference of Catholic Bishops — letters widely cited by the Catholic Left in its demonization of Paul Ryan — were exercises in prudential judgment that were binding on precisely no one, for “reasonable minds can come to different conclusions about more effective ways” to solve the social problems addressed in the letters, including hunger. Thus Sister Simone, in telling the Democratic Convention that the Ryan budget had been condemned by the U.S. bishops, was either woefully ignorant or willfully malicious. And so, by extension, is every Catholic politician or activist who, like Sister Simone, misreads both Catholic social doctrine and the authority of letters written by USCCB chairmen, who speak for themselves, period.

The Weapon of the St. Gallen Mafia is Synodality

A Center of Catholic resistance: the great “Minoritenkirche” in Vienna now belongs to the SSPX