15,000 march for life in Rome: three times the expected turnout 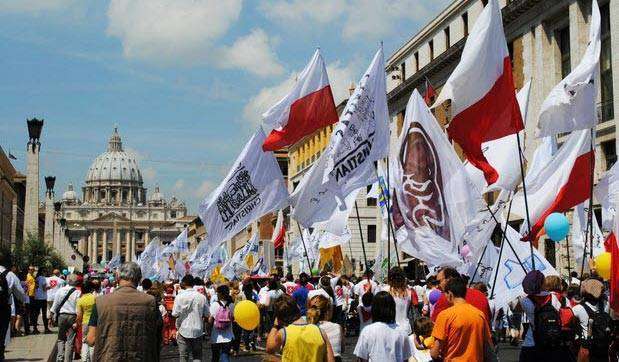 ROME, May 14, 2012 (LifeSiteNews.com) – Italian pro-life activists have high hopes that the extraordinary turn-out and the youthful enthusiasm of the 15,000-strong crowd of this weekend’s March for Life in Rome, will bring the abortion issue back onto the political table with Italy’s new government. Attendees told LifeSiteNews.com that the numbers were at least three times those expected, and that they came not only from the entire length of Italy, but from across Europe.

“It will certainly put the issue on the table,” one organizer told LifeSiteNews.com. “It will send a message to moderate politicians who don’t want to get into hot water, that it’s an issue that is not going away.”

Although there is almost no political interest in the issue in Italy, as in most western countries, Alberto Carosa, a march organizer and leader of the Catholic campaign organization Culturale Lepanto, told LifeSiteNews.com that the “grassroots people” are “not in sympathy with the top echelons” of the political classes.

“The people are de facto demanding a clear commitment for a battle leading to the scrapping of the abortion law, but politicians have already made it clear that a parliamentary battle in this regard is out of question,” Carosa said, adding that the purpose of the March was to bring the issue back to the table.

“While they just talk and agree, at least in words, on a better application of the law, its improvement etc, fundamentally the political class believes that the ‘right to choose’ is here to stay.”

March organizers said they had expected a more modest 5000 at most, based on the turnout of 600 at a march organized last year. Today they are delighted at the extraordinary response.

The huge column of people, most in their 20s and 30s, wound through the city’s historic centre from the Colosseum to Castel Sant’Angelo close to St. Peter’s Basilica. Most visible were the large number of young priests, seminarians and nuns wearing full, traditional cassocks and habits, as well as a large and boisterous contingent of Poles who had come to Rome for the occasion.

Monsignore Ignacio Barreiro, the director of the Rome office of Human Life International who helped to organize the march, spoke at a conference on the life issues on Saturday, on the political situation in Italy.

He told LifeSiteNews.com that perhaps the most important message of the March was directed at the mainstream “official” pro-life organizations who for too long have been “complacent” about demanding that abortion be outright abolished. The huge success of the event, he said, will be a wake-up for them, and not only for politicians.

The march is a “demonstration of a new commitment to defend life” in Italy particularly among the young, Msgr. Barreiro.

“The equilibrium, the balance, of the pro-life movement is going to change on the basis of marches like this.” Msgr. Barreiro noted that organizers are already discussing next year’s event.

“Regrettably in Italy,” Msgr. Barriero explained, “there is a sector of the pro-life movement that is not ready to take a strong position in favour of complete abolition. They say this is not ‘politically possible’. Here in Italy, the main pro-life movement, the official one is the moderate one. Basically what we are trying to do is to influence that movement.

“There will be a new balance because so far, the different groups that are in favour of abolition, have had small presence, and this will push them forward into the lead on the issue.”

“It might not be politically possible,” he said, “but it doesn’t mean that the goal of the pro-life movement should not be total abolition. How will it ever become feasible if you don’t ever propose it?”

Msgr. Barreiro, who was a lawyer and an experienced diplomat at the United Nations before his ordination to the priesthood, said that thus far, the mainstream of the pro-life movement in Italy has failed to grasp that in politics, “you negotiate from a hard line position. You must start with the understanding that you cannot accept a single abortion. If you start from a position of weakness, nothing can be accomplished.”

Italy’s 1978 abortion law allows abortion on demand, paid for by the state, up to the third month of pregnancy. While the country remains nominally Catholic, the days of the stereotypical large, boisterous Italian families are over, with the country’s overall fertility rate standing at a disastrously low 1.3 children per woman.

While some local governments have offered mothers cash bonuses for having more children, there is virtually no interest at the national level among the political class in the country’s birth rate problem, or the pending economic collapse when there is no next generation to enter the work force. Abortion is not included in the platform of any major political party and there is little interest in the upper reaches of the new Monti government in the looming demographic crisis, or awareness of how it is likely to affect the country’s long-term economic prospects.

One feature of the march in Rome that was radically different from that of the U.S., was the huge mainstream media coverage, much of which was hostile.

Monsignore Barriero laughed when he noted that one Italian news outlet called the pro-life marchers “xenophobes,” while running photographs of, in turn, an African seminarian and a Chinese priest. Barreiro said one of the most notable features was the international face of the march, largely due to the enormous international presence of young students at Rome’s Pontifical universities, particularly from developing countries.

Despite having a broadly permissive law, abortion has limited availability in Italy, with 70 percent of doctors refusing to participate across the country, and 85 percent in Lazio, the province of Rome.

Ann Schneible, an American journalist living in Rome, told LifeSiteNews.com, “I was surprised by how well organized it was, by how many people from across Europe were there, and by how closely it, in fact, resembles my experience of attending the March in DC – except, of course, the weather being much warmer in Rome.”

While also noting the large numbers of priests and nuns, Schneible said, “I am encouraged to see the very strong presence of young lay people, many of whom were in their late teens and early twenties.

“They bring a youthfulness and vibrancy to the March,” which is “a powerful statement.”

“Europeans have a reputation for not being active in trying to sway their governments. However, today, it was beautiful to witness so many people from all over the world standing up to the culture of death and making their voices heard.

“This March really empowered the people of Italy.”